We’ve already looked at the first four clubs in the Premier League and how they’d fare with the players numbered from 1-11, so – a bit belatedly – here are four more. 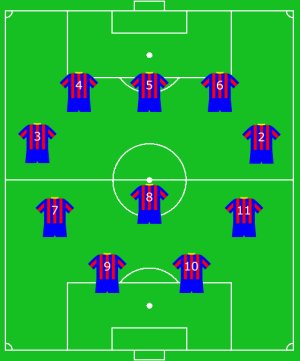 The fact that Bolasie and Zaha are wingers would mean that Guedioura would be overworked, and of course the 2 and 3 switcheroo is sacrilegious.

A fairly continental-looking 3-4-3 for the Toffees. Gibson could perhaps drop back alongside Jagielka as required, but you wouldn’t be putting the house on McGeady tracking back. The front three may also be too similar to play together. Eto’o wearing 5 is obviously a disgrace, but it does provide historical balance as centre-back Johnny Hurst wore 10 on the 1969-70 title-winning side.

A fairly solid-looking layout. If we were being pedantic, we’d want 7, 8 and 10 to be moved around but it hardly matters in the big scheme of things.

Almost a perfect 4-5-1. Hammond is a central player who can play on the left, which is handy as Albrighton is right-sided.