While he has had an up-and-down relationship with squad numbers – quite literally – there’s no denying that Dani Alves knows how to pay tribute with what he wears on his back.

Switching from 2 to 22 at Barcelona was in honour of recently retired team-mate Eric Abidal while, apparently, the 23 he has at Juventus now is reflecting the choice of LeBron James.

He continued that pattern on Thursday night as Brazil beat Argentina 3-0 in their World Cup qualifier, the first game the country had played since the death of Carlos Alberto Torres, the captain of the 1970 World Cup-winning side.

While the rest of the Brazil players wore black armbands commemorating Carlos Alberto, as captain of the side Alves wore an inverse edition:

In addition, the right-back also switched from his usual number 2 to 4, which Carlos Alberto had worn in 1970. A look at the development of the Brazilian numbering system, written by Alexander Howells, can be read here. 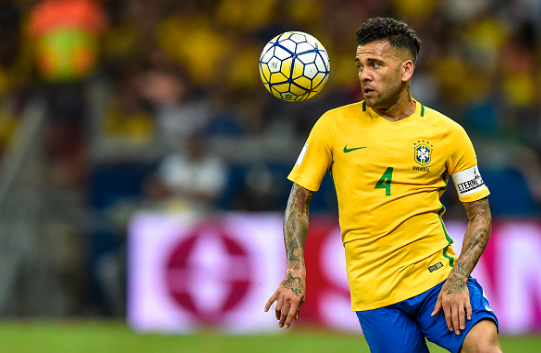 Alves swapped with Gil, who had worn 4 in the previous qualifier against Venezuela, but the centre-back was an unused substitute for both games as Brazil (and Argentina) now availing of the option to use squad numbering for qualification games.

It’s also worth noting that Argentina now have a deviation from their traditional style too, as Lucas Biglia, who would be regarded as a classic ‘5’ in his native country, prefers to wear 6, the number his position would correspond to in mainland Europe.

As regular readers of the blog will know, the Netherlands have featured heavily here. The country was at the vanguard of the alphabetical numbering movement, it fielded 1-11 in two consecutive World Cup games four years apart and of course it is the home of Johan Cruyff, the first player to regular wear a number above 11 in domestic league games. Four decades later, another club from that country has provided the counter-balancing to Cruyff’s rebelliousness. 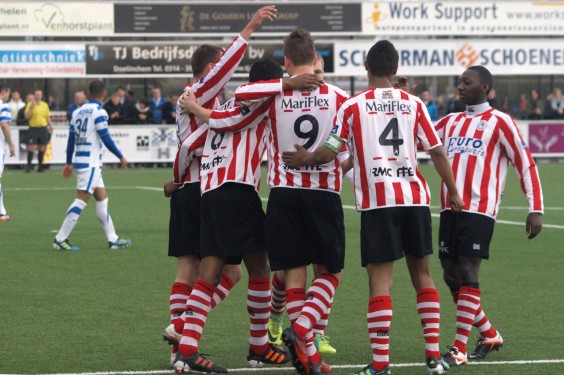 At the start of the 2016-17 season, we noticed that Dutch side Sparta Rotterdam were lining out in 1-11 in Eredivisie games (as you’ll see below, we were only six years slow).

This was huge and brilliant news, a wonderful riposte to the kind of bollocksology that goes on in Italy and other countries, where ‘characters’ wear high numbers for no good reason (don’t even try to justify it, there is no good reason).

As luck would have it, the November issue of our favourite football magazine, When Saturday Comes, features a piece on Sparta and fellow Rotterdam club Excelsior by Ernest Bouwes. Describing Sparta as having “something of an intellectual following”, it quoted the mayor of Rotterdam, Ahmed Aboutaleb, who had said that Sparta was “the sweetest club of the country”.

We read those words on Friday morning and were inspired to contact Sparta directly to enquire more about the move to 1-11. By that afternoon, we were fully informed, thanks to Paolo van Hartog, who works in the club’s communications department. The bottom line is that we have a new favourite Dutch club and our dialogue is reproduced below.

Who had the idea to make this change, and what were the primary reasons?

The decision not to play with permanent numbers was made by the club’s management in 2010. The reason for this was that Sparta is a really traditional club, that likes to keep in touch with their and football’s history in some ways.

Though we are the only club in the Eredivisie not to play with permanent numbers, it’s not mandatory, so there was no permission required.

Were the players in favour, for example was there anybody who liked to wear, say, 19 and didn’t want to change?

Have sales of personalised shirts to supporters suffered?

It did in no way hurt the kit sales, because we already didn’t have names on the back as we had two back sponsors.

Paolo also answered a query as to why, going right to left, the traditional Dutch back four reads 2-3-4-5 and we’ll expand on that in a proper article soon, joining the other origins articles.

Sparta don’t employ that system though, as Paolo outlines:

Our current manager, Alex Pastoor, likes the idea of tradition, but he is also a great admirer of English football. So he wanted to use the traditional English numbering, which means we always play with:

The players are certainly invested in the importance of the numbers on the back. Recently, Paolo interviewed Mathias Pogba for the official club site (brother of Paul and former owner of the Partick Thistle number 99 shirt).

When asked to speak Dutch, Pogba counts from one to ten with no problem…when he arrives at 9, the striker starts to smile. It’s the number that’s traditionally assigned to the centre-forward – with clubs that don’t have permanent numbers, like Sparta, that relationship is even clearer.

In the short-term, Pogba wants to recover from his injury and be back at the match-squad, looking further playing with that number is what he desires.

When he does return, we’ll be cheering him, and the rest of De Kasteelheren on.